The group developed a project focused on people with motor difficulties 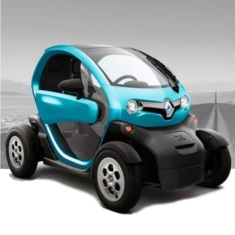 The OrniTwizy team, integrated by students from Feevale University, won the Twizy challenge of the Renault Experience. The group, which won the national competition, will represent Brazil in the Twizy Contest, which will take the winners of all countries to Paris, France. The team will assemble its prototype in Curitiba with the structure of Renault, and engineers, designers and business professionals of the company will monitor students throughout the month of July and early August.
The project of a new electric car model for people with motor difficulties, created by the team, was possible due to the Innovation Office and Creative and Technological Sciences Institute (ICCT) support. The group is mentored by the Feevale professors Juan Almada, Fabiano Nunes and Moisés de Mattos Dias and is formed by the students Felipe Machado from the Design course, Jonata Rocha Fett and Nickolas Augusto Both from Electronic Engineering, Matheus Furlan da Silva, from Production Engineering, and Marco Antônio Fröhlich from the Professional Master's Degree in Materials Technology and Industrial Processes.
In the international challenge on next October 4th students will compete for a prize of 30,000 euros, as well as tickets to attend the Consumer Electronics Show, a major automotive innovation event to be held in January 2020 in Las Vegas, US.
Tweet
Mais notícias