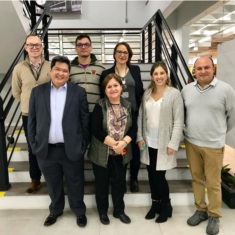 Self-service technology used in space is a reference
The Paulo Sérgio Gusmão Library, located at Campus II of Feevale University, two years after its expansion and modernization, remains a reference for libraries in Brazil and Latin America. On Tuesday, May 28, the coordinator of Feevale’s libraries, Patricia Valerim, received the librarian Nelly Pastor and Fernando Kato, from the technology area of the University of Lima for a visit to the space. The main objective was to know the self-service technology adopted at the Institution.
According to Patricia, the Peruvian university will build a new library and is seeking references to the project. In addition to the technology, the representatives' attention was drawn to the differentiated services, the living spaces and the study areas provided by Feevale library. Brazilian and Latin American representatives from the company that supplies self-service technology also attended to the visit.  The system analyst from Feevale, Fabiano Francisco dos Passos Stoffel, participated in the meeting too.
Tweet
Mais notícias